in memory of Christopher Duke 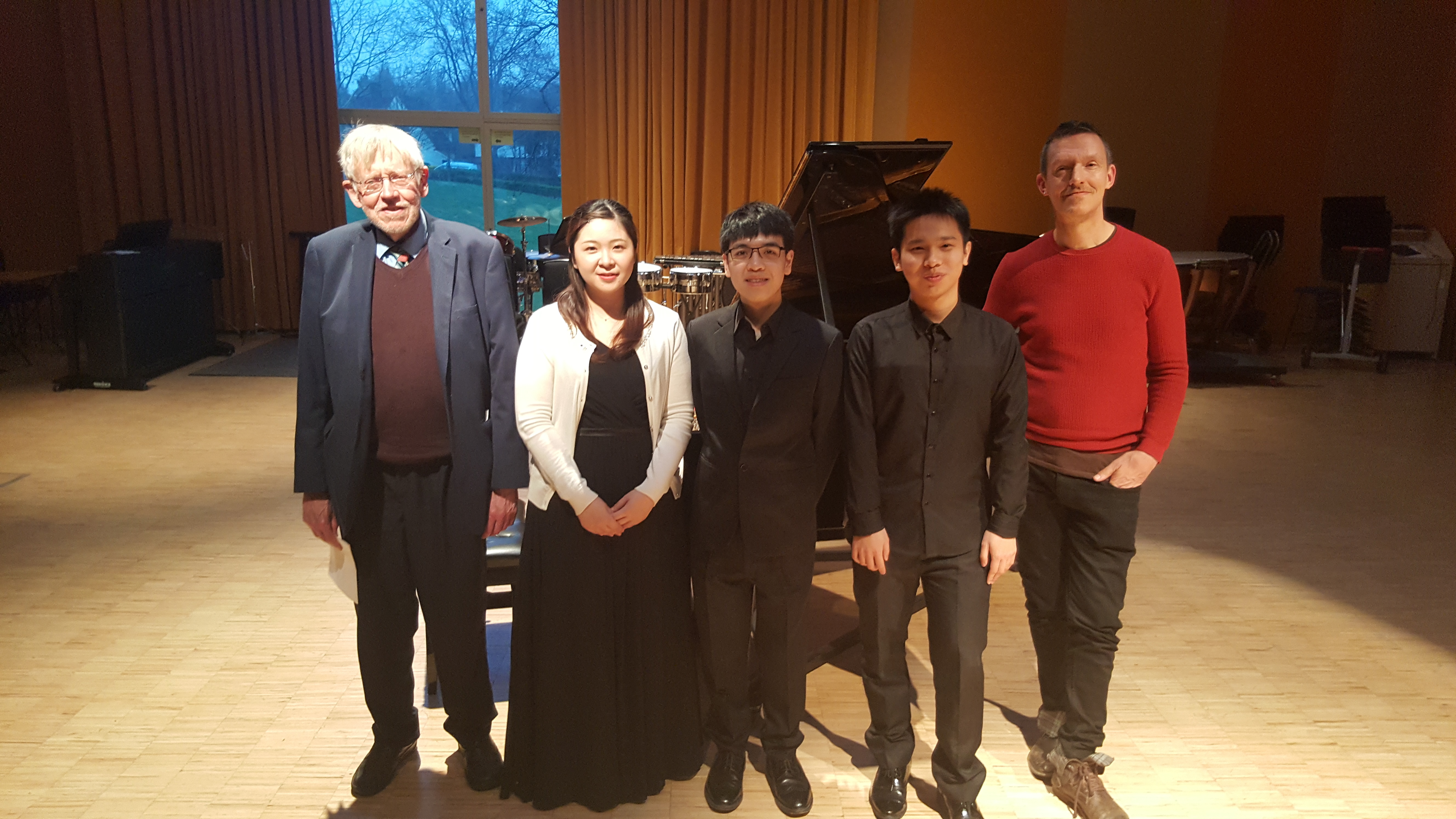 Six excellent young pianists had been selected from a very competitive field of applicants to contest the final of the 2019 Watford International Piano Competition in memory of Christopher Duke. The dedication of these pianists was astonishing and the pianistic standard high. This report is meant to reflect the breadth of opinion expressed during the course of the competition and to provide some food for thought for both listeners and competitors.

The piano is the instrument of choice of the great composers. Understanding and interpreting their ideas is the real challenge to which pianism is simply a means to an end. As these pianists continue on their journey, it will be interesting to see where their future lies.

Apart from the obligatory Chopin Waltz, Beethoven, Chopin and Schumann provided the most  serious musical challenges of the competition. XueLin Xie opened with Beethoven’s F sharp major Sonata. Beethoven himself rated this sonata much more highly than his ‘Moonlight Sonata’. It was good to see XueLin having matured much as a musician following last year’s ‘Waldstein Sonata’ carry off the second prize. There was careful phrasing and reading of the score coupled with exciting pianism. Perhaps a more romantic and leisurely approach in the first movement could have been even better. The dialogue in second movement between Beethoven and Haydn, Beethoven’s teacher, could be more charmingly explored, while leading more organically to the virtuoso runs. Ligeti’s ‘Devil’s Staircase’ was given a startling performance, even if occasionally the climaxes were reached a little early. A slightly warmer sound would have added to the highly enjoyable virtuosity in the Chopin Waltz and Scherzo.

Xizi Zhang had some truly impressive pianism despite surviving a rather difficult train journey to the competition. Although her first Scarlatti Sonata was a little fast, the second one had some fabulous finger work. Xizi overcame the many challenges of Chopin’s second study to play it with astonishing ease. The Chopin Waltz was very well characterized and exciting. More mystery and drama were perhaps needed in the Prelude from Debussy’s Pour le Piano. A better singing tone and rhythmic character would have helped in the Sarabande while the Toccata may just be too fast at the chosen speed. It doesn’t allow much room for the left hand melody to be expressive enough in the middle section nor for the final climax to add another level of excitement. However, both Xizi Zhang and XueLin Xie are highly promising young pianists who could have a great future before them.

Guangmei Chen chose Schumann’s F sharp minor Sonata and it is interesting that large scale single works tend not to be favoured by our juries in recent years. Hers was an interesting and varied account, with plenty of passion as well as lyricism. If some moments of absolute calmness, as in the German word ‘innig’, still eluded her, it is understandable in a piano competition where it is extremely difficult to retreat into an inner world amid all the external pressure. One of Schumann’s wildest children, the Sonata is not often played. More desperation in the opening and more fantasy in the Spanish Fandango rhythms could have made her exciting performance of the first movement even better. The second movement was beautifully played, while the Scherzo had much esprit even if the sudden retreat to the world of Bach in the Trio seemed a bit incongruous here. The Finale’s fantastical journey through different sound worlds didn’t quite lead us to the final apotheosis where Schumann finds his Clara at last. But Guangmei Chen wasn’t far away and it is a real strength of the competition that it allows genuine talent both to be heard and to gain vital experience.

A perpetual question for pianists taking part in competitions is whether to stay with tried and tested ‘warhorse’ pieces or to risk something new. It was refreshing that Alis An had chosen the latter path. Her Schumann Symphonic Studies had spontaneity, communicated well and showed personality. She may eventually decide not to play all the repeats, to bring more variety to the dance rhythms, to explore the depths of the G sharp minor study and to scale the dynamics of the finale more convincingly. The audience clearly responded well to her playing and warm personality.

John Lee won first prize and he is an assured and highly talented pianist who we expect much of in the future. The interpretation of the Beethoven Sonata Op.101 is a challenge for all pianists. John Lee gave a carefully considered reading of the score with much dynamic sublety and expressive detail. It will be fascinating to hear John Lee with this piece in a few years’ time, when he has perhaps reached further to the emotional extremes of the sonata. The Chopin F major Waltz was played with verve and accuracy. In the Scherzo from Tchaikovsky’s Pathétique, a rarity in the transcription by Feinberg, John Lee pulled out all the stops in a stunning pianistic tour de force. However, the original intention of this scherzo as a dance of death is here turned on its head, especially as some view the Pathétique as a suicide note of a gay artist who could no longer continue living in an intolerant society.

Mika Inukai, who won 3rd prize, started with a lovely sense of poetry and a warm sound, her playing marked by an effortlessly natural style throughout. Her Chopin/Liszt ‘Meine Freuden’ was beautifully shaped and nicely contrasted with a stylish modern piece, Musica Nara by Minako Tokuyama. The opening theme of her Chopin Waltz in A flat could perhaps be played more freely but the contrasting sections had a beautiful rubato. Her Chopin Sonata had good contrasts and flow, although some of the dream worlds of the development section of the 1st movement could have been allowed more time to breathe and the darker side of the movement given more weight. There was no time for the middle movements to be played, but the many virtuoso challenges of the Finale were expertly met and the left hand contributed much warmth as well as excitement. Possibly there was room for more shaping of the theme as it gradually develops to its final apotheosis. A slightly slower tempo would also shine more light on its many intricacies and allow the left hand melodic lines to blossom underneath the virtuoso runs. However, it was a wonderful end to a remarkable competition that left the audience stunned by the sheer quality and variety of musical talent.

The organisers very much would like to thank our tireless and dedicated jury, Niel Immelman and Rolf Hind, as well as Bill and Sandra Duke and the many helpers and supporters who have made the 2019 Watford International Piano Competition a success!

We look forward to seeing you next year.